by CryptoCy News
in Bitcoin News
839
0

This year the global power needed to create cryptocurrencies, which could be rival to the entire electricity consumption of Argentina and a increasing driver for energy producers from the US to China.

Morgan Stanley analysts wrote in their note, that miners of bitcoin and other cryptocurrencies could require up to 140 terawatt-hours of electricity in 2018, about 0.6% of the global electricity. This amount is more that power demand from electric vehicles in 2025.

“If cryptocurrencies continue to appreciate we expect global mining power consumption to increase,” the report says.

While the figure is too small to be a major driver of global utility shares, it represents an important growth story for companies investing in wind and solar power combined with energy storage – a list that includes NextEra Energy, Iberdrola and Enel, according to the note.

There are other companies including big oil and others, which are investing in renewable energy and green-power developers backed by ICO capital.

Hydro-Quebec is the Canada’s biggest electric utility with more than 30 cryptocurrency miners. Currently, many of them are operating in China. There are expected to see agreements announcement this year, a spokesperson Marc-Antoine Pouliot said in an interview.

Within four years, Hydro-Quebec envisions miners soaking up about five terawatt-hours of power annually – equivalent to about 300 000 Quebec homes – from the surplus created by the region’s hydroelectric dams. 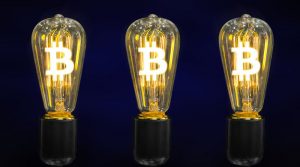 “If we have to invest in our transmission network, these investments will be paid for by the miners,” Pouliot said.

By the end of 2017 the power demand for bitcoin rose to about 20.5 terawatt-hours a year, Bloomberg Finance reported on Wednesday. That equates to more than half the 38 terawatt-hours of electricity used annually by the world’s biggest traditional miner, BHP Billiton- or a 10th of the electricity needed to power South Africa.

About 15.4 terawatt hours used by Chinese miners, which is a pulse to the country’s industry. According to the report, China used only 0.2% of the country’s annual electricity production, though it is world’s biggest community of bitcoin miners.