by CryptoCy News
in Blockchain
901
0

Next year blockchain is going to be one of the largest users of capacity due to the fact of its growing demand.

One of the first big companies to see blockchain’s promise is IBM. It’s a 106-year-old company, which is contributing code to an open-source effort and encouraging startups to try the technology on its cloud for free.

According to researcher Markets & Markets, blockchain-related products and services market will reach $7.7 billion in 2022, up from $242 million last year. IBM is going all in on blockchain shows just how far the digital ledger has come since its early days underpinning bitcoin drug deals on the dark web. 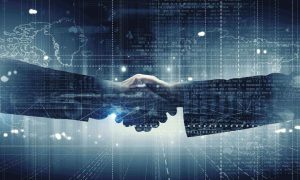 IBM and Microsoft are making a killing from those who are making the transition to cloud services. Suddenly old databases sold by Oracle have a use again. In October, Oracle announced the formation of Oracle Blockchain Cloud Service, which helps customers extend existing applications like enterprise-resource management systems. A month earlier, SAP said clients in industries like manufacturing and supply chain were testing its cloud service.

Vole has expanded its partnership with consortium R3 to make it easier for financial institutions to deploy blockchains in its Azure cloud. Meanwhile, one of the key companies behind the Hyperledger consortium is Big Blue. It is a nonprofit open-source project, which has a purpose to create standarts for blockchain technology use.

There are six in 10 larger corporations considering blockchain to be tested or used by companies such as Wal-Mart Stores and Visa to streamline supply chain, store records and speed up payments.

The  CEO of WinterGreen Research gave a prediction that 55% of large companies with over 1,000 employees will use blockchain cloud instead of their own data centres during 5 years.