by CryptoCy News
in Bitcoin News
916
1

Since the start of the year the price of bitcoin has been taking a beating and it could still rise significantly and reach between $50,000 and $100,000 by the end of 2018, the SaxoBank analyst Kay Van-Petersen predicts.

“First off, you could argue we have had a proper correction in bitcoin, it has had a 50 percent pull-back at one point, which is healthy. But we have still not seen the full effect of the futures contracts,” he told CNBC.

At the start of last year Van-Petersen correctly predicted bitcoin’s jump saying that the digital coin would reach $2,000 in 2017. At the time bitcoin was trading below $900. After that in May bitcoin surpassed $2,000 mark. 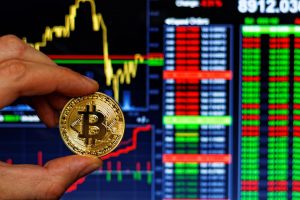 Also the Saxo Bank analyst mentioned that bitcoin rivals could also gain significantly pointing ethereum, which is likely to surpass bitcoin this year in many applications.

“Ethereum came after bitcoin, it has a more unified leadership than bitcoin,” he said. “They seem to be a bit further along the way in regards to forming the solution to scaling issues. And you can see transactions on their side eclipses transactions across other cryptos.”

Van-Petersen said bitcoin will be driven by a larger uptake of institutional investors and futures contracts. Also he said that the asset tends to trade around a certain level then “re-rates” .

“I wouldn’t be surprised if it’s something we are seeing. It’s kind of building a foundation, then will re-rate a bit higher.”

This week Bitcoin along with its rivals, such as ethereum and ripple saw a big sell-off. It came after China and South Korea announced about setting ban on cryptocurrency exchanges. Bitcoin dropped nearly half of its value to the mark of $10,776.