by CryptoCy News
in Interesting
838
0

According to the contract, CashBet Coin will be the exclusive Blockchain partner of the club. And Arsenal becomes the first football team in relation with cryptocurrency. 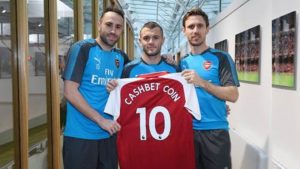 Inside the Arsenal’s Emirates Stadium, CashBet Coin will have prominent branding placements.

The chief executive and founder of CashBet Mike Reaves said:

“With our ICO for CashBet Coin, we are actively targeting a global, multi-billion-dollar marketplace of iGaming content providers, operators and players. We are delighted to do so in partnership with one of world football’s true giants in Arsenal, enabling us to build our brand and engage this audience in a meaningful way.”

The pre-sale of ICO began yesterday and will end on 20 February.