by CryptoCy News
in Bitcoin News
854
0

According to Saxo Bank’s prediction, Moscow and Beijing plan to crack down on bitcoin, which can make digital coin’s collapse next year. The bank is known to be famous for its shocking predictions published each December.

The bank predicts, that in 2018 bitcoin will reach to $60,000 in price, with market capitalization of more than $1 trillion. After that event happens, the world’s leding countries will join efforts to attack it.

“The rise of bitcoin and other cryptocurrencies has been one of the most spectacular phenomena of financial markets in recent years. Bitcoin will continue to rise – and rise high – during most of 2018, but Russia and China will together engineer a crash,” the bank mentioned.

Early in 2016, the bank had predicted the Bitcoin will rise. It forecast, that the price would triple from $700 level, which was seen last year.

China has already cracked down on bitcoin by banning initial coin offerings (ICOs). Chinese regulators also prohibited bitcoin exchanges in September after Beijing suspected cryptocurrency trading was used for moving money out of the country. 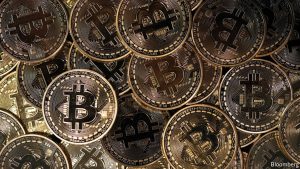 There is no regulation of digital money in Russia. The countries president Vladimir Putin ordered government to regulate cryptocurrencies by July next year.

The Russian Finance Ministry insists that creation of bitcoin and other digital money should be illegal, because their mining has similarities to financial pyramids, which are forbidden in Russia. However, buying cryptocurrencies would not be punishable by law, the ministry promised.