A Little bit About Monero (XMR)

Monero (XMR) is an open-source, privacy-oriented crypto asset that is built and operates on the blockchain concept.

It was launched in April 18, 2014. This cryptocurrency is an electronic cash, providing fast, cost-effective payments around the world, without any multi-day holding periods and risk of fraudulent chargebacks.

Monero is one of the leading crypto assets that has its focus on private and censorship-resistant transactions. It uses specific cryptography in order to protect the transaction data such as the identity of a sender and a recipient, together with the amount of the transaction, making it anonymous. This makes sure that the activity of every Monero user reinforces the privacy of all other users. As a result, Monero transactions become confidential and can not be found.

In addition to anonymity, the mining process of Monero (XMR) is based on the idea that everyone is equal and deserves to have equal opportunities. During the Monero project launch, its developers didn’t keep any stake for themselves, banking on contributions and community support to secure the further development of this digital currency.

During the mining process of Monero, miners get rewarded for their activities by joining mining pools. They also have the option to mine XMR tokens individually. Monero mining process can be implemented on a standard computer, without need of any certain hardware like the application-specific integrated circuits.

It can be run on all leading OS platforms, such as Windows, macOS, Android, and Linux.

It is also worth noting that this crypto asset is quite attractive. It has attracted the best crypto researchers and developers around the globe.  Approximately 500 developers have contributed to the Monero project, particularly with regard to 30 core developers.

Below, on the left side, you can find the yearly chart of Monero and XMR/USD full chart (by TradingView). And on the right side, find technical analysis for XMR/USD (with time period from 1 minute to 1 month) (by TradingView).

Monero to USD or XMR to USD: More About Monero (XMR) Price

This coin has a market cap of more than $1 billion USD ($1,032,710,283 USD), with circulating supply of about 17.5 million XMR. One of the main differences between Monero and the first & most popular cryptocurrency, Bitcoin is that if Bitcoin has a fixed supply of 21 million BTCs, Monero does not have a fixed supply, meaning that there is no fixed number of XMR tokens that will ever be mined.

If we look at the Monero price chart, we can see that is has set its all time high price – $495.84 USD on January 7, 2018, following the Bitcoin price boom in late 2017. This also can be a sign that there is a correlation between XMR and BTC prices. 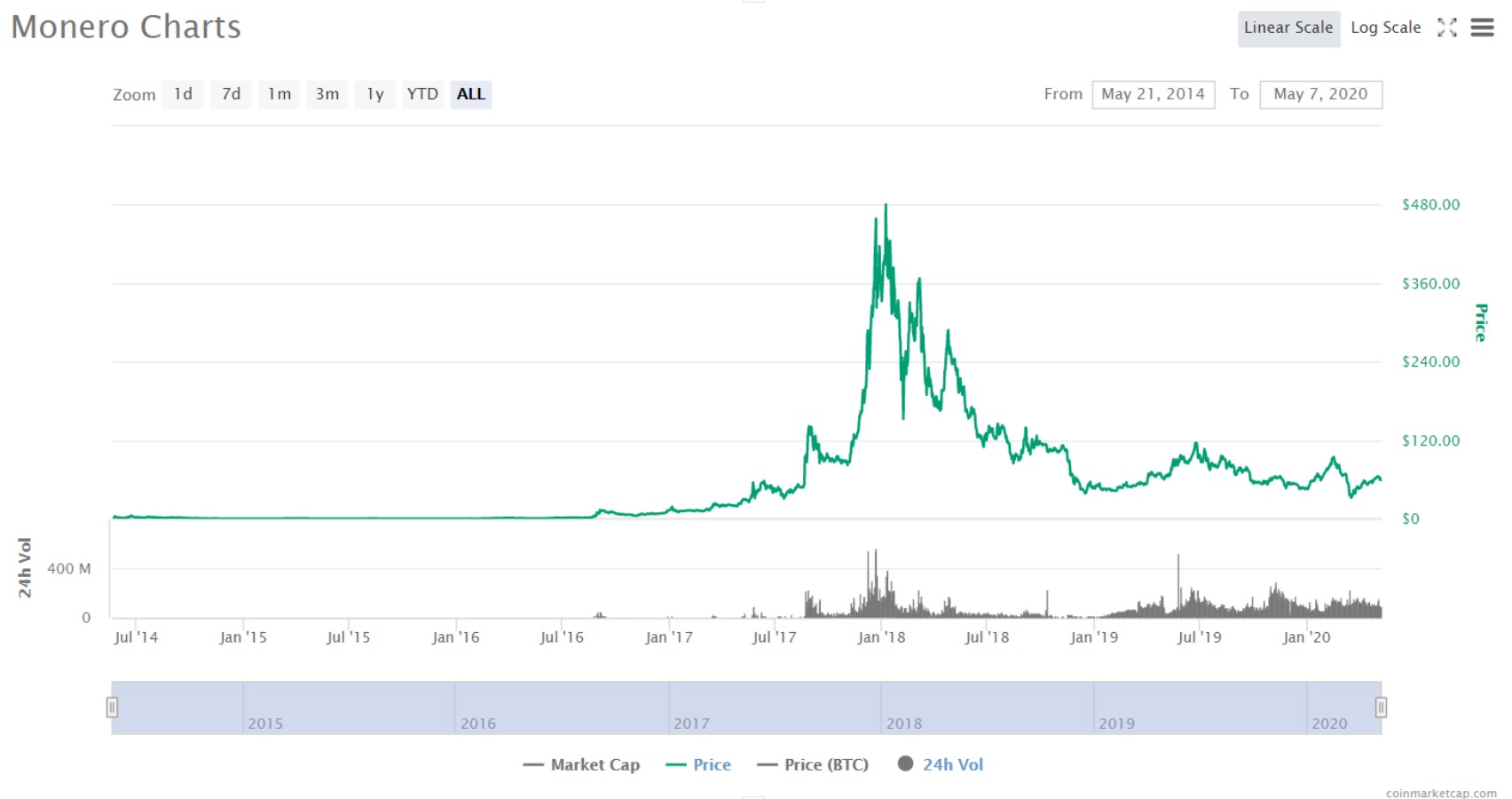 As the official website of Monero has reported, it adds a new technology called Dandelion++ to enhance privacy.

Dandelion++ (DPP), which is an upgraded protocol to the original Dandelion proposal for Bitcoin, will change the way transactions are propagated to the network, making it far more difficult to link a transaction to a particular IP address.

Dandelion++ is now part of the code and will be used by default in the next release of the Monero software. However, the official launch date is not set yet.

It’s worth noting that recently John David McAfee, a British-American computer programmer and businessman, has shown his support for Monero one more time. He mentioned that prefers Monero over Bitcoin for its privacy. As he wrote on Twitter: “Hardly anyone accepts Bitcoin these days. Everything is Monero.”

McAfee also added: “The most widely “used” coin is Monero. If you doubt that check vendors on the Dark Web. No-one accepts Bitcoin anymore,” emphasizing:

Right now it’s Monero – the most widely used (“used”, not “traded”) crypto in the World.

To learn more about Monero (XMR) and to stay up to date with the latest news regarding this crypto asset and other cryptocurrencies, check the latest crypto news.

To learn more about Monero (XMR) price, its historical changes, the list of exchanges this coin is traded in, check the coin’s profile on CMC.

Below, you can find the GEO map of Monero, which displays the price of XMR regarding the national currency of different countries around the world in real time. For instance, as the map shows, 1 XMR in EURO is 55.29, XMR in Canadian dollar is equal $83.07 CAD, etc.