by CryptoCy News
in Uncategorized
831
0

The well-known cryptocurrency legend Laszlo Hanyecz bought two pizzas with 10,000 bitcoin back in 2010 to prove its real working. Now he’s at it again.

This time he wants to test the Lightning Network. It is a technology, that runs parallel to blockchain like bitcoin’s network and has a purpose to increase the transactions speed. Back in that time Hanyecz paid 0.00649 bitcoin for two pizzas, or US$67, and the transaction cost about 6 cents.

When Hanyecz bought pizza with bitcoin about eight years ago, it was one of the first purchases done with the cryptocurrency, and it showed the bitcoin community that it could actually be used as a means of exchange, he said.

Late last year that was put in doubt as transaction fees jumped up to $55, according to BitInfoCharts. It made everyday purchases non practical. 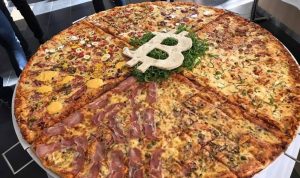 Developers, including those for the Lightning Network, are working on ways to solve this problem.

Hanyecz said in his telephon interview, that yet he believed it’s possible to buy pizzas with bitcoin. But if the transaction fee is 2 times expensive, than pizza it will not work.

“The idea is that on Lightning Network we can get the security of bitcoin and instant transfers. You don’t have to wait for a blockchain confirmation.”

Lightning Network works when two parties open a payment channel between each other, committing funds to the channel. The parties can then transact without having to broadcast the transactions to the bitcoin blockchain, avoiding delays and costs. Once the channel is closed, only the resulting balances are recorded on the blockchain, not the full transaction history of the channel.

The technology is still in a testing stage and the mechanism is far from frictionless.

Hanyecz opened a payment channel with another blockchain enthusiast, who ordered the pizza for him.

The cost of pizza was about $30, when Hanyecz bought it on May 2010, compared to today’s 10,000 bitcoin with $100 million worth. Since that it was remembered as Bitcoin Pizza Day.